News and views on yoga, life, befriending and embodying our truth through holistic practices, inspired by the beautiful, pristine nature of southern Crete 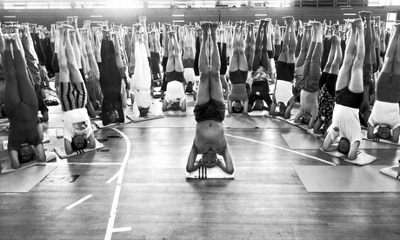 "Physical health is not a commodity to be bargained for. Nor can it be swallowed in the form of drugs and pills - it has to be earned through sweat. It is something that we must build up."

B.K.S. Iyengar was the founder of Iyengar Yoga and is considered one of the foremost yoga teachers in the world. He lived to the age of 95, and over his 80 years of dedication to yoga practice he refined and perfected the technique of doing yoga poses that is widely taught throughout the world. Iyengar began life as a frail and sickly child; in contrary, in his 90s, the yoga master would stand on his head for 30 minutes to start his morning yoga practice.

In his book, Light on Life, he explains how physical weaknesses led him to take up the ancient practice of yoga: "My poor health was matched, as it often is when one is sick, by my poor mood," he writes. "A deep melancholy often overtook me, and at times I asked myself whether life was worth the trouble of living. Seeing that the general state of my health was so poor, my brother-in-law recommended a stiff regime of yoga practice to knock me into shape and strengthen me up to face life's trials and challenges as I approached adulthood."

Over the next eight decades, Iyengar's genius lay in using his own body as a living laboratory to experiment on how different yoga poses (asanas) can alleviate health problems. He used props such as ropes, belts and bricks to help even the elderly, weak, and inflexible experience yoga's therapeutic effects, often allowing yoga student to hold positions for longer periods than might be possible without them. If a student has not yet achieved the strength or flexibility necessary to perform the final form of an asana, the props can be fantastic learning aids, as through their use one can understand the correct action required for its execution.

Iyengar yoga appeals to a huge range of people, of all fitness levels, and is particularly well-suited to yoga students who have a meticulous approach to yoga and an interest in the body’s anatomy. It is excellent for people with back problems and for people who suffer from stress, two conditions that often go together, but in reality anyone can benefit from it. It is a particularly good form of yoga for beginners, because so much emphasis is placed on the best possible alignment of the body. Alignment and symmetry are very important, for the safe and optimally beneficial practice of the poses, as is intensity of execution of the asanas, which captures concentration to the physical sensations of the present moment, drawing the mind away from everyday worries. Furthermore, the poses in Iyengar yoga are done with great attention to detail. As a result, the increased body awareness developed allows one to become more aware of posture and its direct effects on psychological states, and to carry this awareness off the yoga mat into everyday life. Practiced regularly, Iyengar yoga is a wonderful, natural way to cope with physical, mental, and emotional stress.

Pranayama, or the control of the vital energy, covers a wide range of breathing tecniques and is part of the foundation of all types of yoga. With Iyengar yoga, breathing is used to maximize the physical benefits of the various asanas. In addition, pranayama itself helps tone the circulatory and respiratory systems, while aiding proper function of the nervous and digestive systems. The result is a pervasive feeling of calm as well as increased energy. Pranayama brings the senses and the mind under control so that the student is ready to experience the meditative aspects of yoga.

According to Iyengar, yoga's scope is indeed beyond the physical motions: "The practice of yogasana for the sake of health, to keep fit, or to maintain flexibility is the external practice of yoga," he continues in Light on Life. "While this is a legitimate place to begin, it is not the end... Even in simple asanas, one is experiencing the three levels of quest: the external quest, which brings firmness of the body; the internal quest, which brings steadiness of intelligence; and the innermost quest, which brings benevolence of spirit. Often, we hear people saying they remain active and light when they do just a little bit of asana practice. When a raw beginner experiences this state of well-being, it is not merely the external or anatomical effects of yoga. It is also about the internal physiological and psychological effects of the practice."

In recent years, researchers have started measuring some of yoga's effects on health, and -not surprisingly- the results are fascinating. A consistent practice of yoga was the requirement underlying all the following studies: